Prizes For Some, Miniature American Flags For All

Alrighty. Well to bring another year to a close here are how the wheel o' prizes landed. Remember most of these prizes were donated by EveTimeCode.com

Where your business matters!

Keep in mind that winning a more valuable prize disqualified you from winning smaller prizes to share the wealth.

If you won a prize a contract should already be up in your name (with one exception because I ran out of contracts like a noob, but it will go up ASAP).

Thanks to everyone who came out, I had fun and hope you did too.

Welcome to the event page for Nightmare in New Eden Part 3!  Please check back often for updates on prizes.

Many of the prizes for Nightmare in New Eden have been donated by EVETimeCode.com

Where your business counts!


What is Nightmare in New Eden?


I love Halloween, and EVE Online and this is my attempt to have some fun and share those loves with you guys, and with a ship named Nightmare there was only one logical choice. I take a Nightmare and some friends, offer up and ask for donations of prizes, and we go blow up some space pixels for fun all around.

Can I have your stuff?


Yes! Prizes will be handed out to based on participation and combat statistics during the event. I'll be using zkillboard.com again to determine winners because it is handy, so make sure you have your API on that site or eve-kill.net so I can pull the info.

Prizes will be awarded in order of Jita market value at the time and each pilot will receive only the most expensive prize they qualify for unless there are no other candidates in an effort to share the wealth. Ones not directly related to me will be counted from 00:00 to 02:00 server time.


Not able to attend but want to watch?


You can do that! I'll be streaming it from my point of view at twitch.tv/v_nome. Hopefully this year I won't mess up the audio.

Also whether you can hop on the plug.dj/nine to play and listen to music with us!


If you'd like to donate prizes to the event you can contact me in game as Tyen, here, on Twitter as @EVE_Tyen or @v_nome, or via messenger pigeon. Sorry, smoke signals can't be received this year.

I'd also like to drop a plug for the fact I'm participating in Extra Life, a charity drive for children's hospitals, in support of Stollery Children's Hospital Foundation who do a lot of great work. You can check that out here:

Sorry about that, coming back from the dead has a way of making you crave the strangest things.

It's October again already and that means one thing, I'm already late for trying to start things rolling. So consider this notice that yes, I do intend to watch you all explode space pixels again this year for fun and prizes. By putting this in writing and out there for you all to see (and not just the few people I've talked to about it more privately) I can't back out now. So hide your kids, hide your wife 'cause they're blowing up everybody.

What is Nightmare in New Eden?

Just as the clock ticks over to October 31st EVE time (0:00 UTC) I will arrive somewhere in low security space (Tama worked well last year) piloting a Nightmare along side a fleet to support me. I will put up a prize of a Nightmare hull to be awarded to the pilot who does the most damage on my kill mail. I try to also find ways to offer other prizes for more broad categories that hopefully involve the widest range of participants, if you have suggestions let me know.

If you'd like to donate prizes to the event you can contact me in game as Tyen, here, on Twitter as @EVE_Tyen or @v_nome, or via messenger pigeon. Sorry, smoke signals can't be received this year.

More details to come soon, but in the mean time I'd also like to drop a plug for the fact I'm participating in Extra Life, a charity drive for children's hospitals, in support of Stollery Children's Hospital Foundation who do a lot of great work. You can check that out here:

Thank You and Good Night!

First of all I want to thank everybody who made this event what it was by donating prizes, coming out to participate, and helping me spread the word about this event. It was an awesome night and I hope you were there for it. In particular I need to thank two people without whom this event would not have been half of what it was: 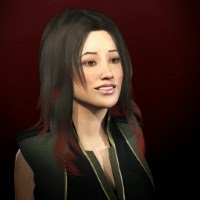 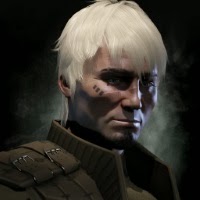 Anyway, on to the stuff giving! Keep in mind that in an effort to share the wealth you will receive the most expensive prize you qualify first, and only receive others if there isn't a clear runner-up who has not yet been awarded a prize. I'll list these in order of ISK value in Jita at the time I'm writing this, since that is the order I'm determining them and the original list seemed to be in no discernible order (It was ordered based on when they were donated, but you guys don't care about that):

All winners of prizes not donated by Somer BLINK should already have a contract waiting from Tyen, others will have their names passed along to Somer and hopefully receive them soon.

Welcome to the event page for Nightmare in New Eden Part 2!  Please check back often for updates on prizes.

You, dear capsuleer, are cordially invited to the greatest Halloween party in the universe.  Are you brave enough to show your face?  Or are you more trick than treat?

Why?
To blow up Tyen's Nightmare as he tries to avenge his ghastly death, to have fun, and win
prizes!

Can I have your stuff?
Yes! Prizes will be handed out to based on participation and combat statistics during the event.
Make sure to set up your API key on EVE-kill.net, only API verified kills will be counted for the
appropriate prizes. In the case of overlap, more valuable prizes will be drawn first and discount
you from lesser prizes.


What are the rules?
Starting at 02:00 Tyen can start attempting to warp off the field. If successful the event is over
and the defensive fleet will be considered victorious. All prizes not directly related to Tyen's
Nightmare will be counted from 00:00 to 02:00 regardless of when or if Tyen's Nightmare is
destroyed.

If you would like to contribute to the prize pool or participate defensively please contact Tyen in game, on Twitter as @EVE_Tyen, or on Google+ as v nome.

Link to the event from your blog using one of these handy images below: 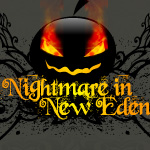 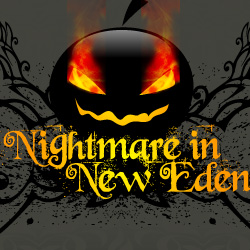 Posted by Anonymous at 11:48 AM No comments:

. . . there was a fearless young capsuleer named Tyen.  Piloting a Nightmare through Loes with only a handful of Basilisks as backup, he dared everyone to meet him, to try and kill him.

After a long, harrowing battle, they succeeded.  Tyen was dead.  The nightmare was over.

But something went wrong.  When Tyen woke up in his clone bay, he could still feel what his corpse was feeling.  He could see through its eyes and hear its thoughts.  He knew it was drifting aimlessly through space-- never stopping, never disappearing.

The corpse demanded revenge.  Tyen, being a (relatively) sane and capable pilot, tried his best to drown out the voice.  For two years he succeeded or, rather, he convinced himself that he had.  Lately, though, the voice is getting louder.  He couldn't ignore it.  Soon, it consumed his waking hours and haunted his dreams.  It was all he could hear.

"Kill. Kill kill!  Avenge me with fire, bathe the universe in blood!  All who are near me will die!!!"

All who are near you will die.